There’s an element of magic involved in the writing of every novel, at least I’ve found that to be so. For Absence of Grace, the clearest example was when the phrase, Gerrum the Jap, suddenly rang inside my mind.

That was my introduction to one of my main characters, Gerrum Kirsey. Half Tlingit (Alaskan native), Gerrum, as a child growing up north of Seattle, was thought to resemble the Japanese, recently defeated in WWII, and as a result he was bullied and teased.

Knowing this meant that the adult Gerrum would be coming of age in the late 60s, which fixed the novel’s “current” action in the 1980s when Gerrum would be approaching his forties.

This timing meant that I would be able to draw on experiences I had attending a Catholic women’s college in the late 60s to provide a background for my other main character, Clen McClendon.

The plot, what happened to Clen and Gerrum, arose gradually from a what if? resurrected from a long ago conversation, the details becoming clearer only after I began to write. Then before going much farther, I needed to choose where the story was to take place. 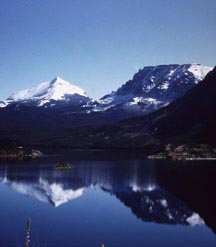 Although I must confess, I haven’t spent a lot of time in Alaska, a few days in Wrangell convinced me it was the setting I’d been looking for. Wrangell just felt “right.” As my husband and I took a jet-boat excursion up the Stikine River, hiked to the top of Mt. Dewey with its overlook of the Zimovia Strait, and accepted an impromptu invitation to visit a tiny salmon cannery tucked into a former garage (since closed, but one we ordered from for several years) I became even more convinced of this “rightness.”

Beyond the college and Wrangell experiences, one other personal experience contributed greatly to the writing of this novel, and that was my time serving on a jury for a man accused of shooting his wife. Although I was hoping to be excused, I’m now grateful I wasn’t because of what I gained—an invaluable, in-depth look into the way trials are conducted, witnesses are examined, and cases are built. And that trial provided me with the inspiration for Hailey’s character.

I hope you will download and enjoy reading the story that resulted.

Back to the book